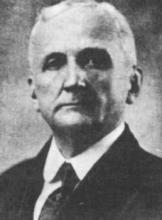 Anthony Johnson Showalter (May 1, 1858 – September 14, 1924) was an American gospel music composer, teacher and publisher.[1] He was born in Cherry Grove, Virginia. Showalter was trained in the Ruebush-Kieffer School of Music and was teaching in singing schools by age fourteen. In 1884, he formed the Showalter Music Company of Dalton, Georgia. He was also an elder of the First Presbyterian Church in Dalton.

Showalter's best known song is "Leaning on the Everlasting Arms", which was published in 1887. He wrote the music and chorus, and Elisha A. Hoffman wrote the verses.[2] The song features prominently in the score of Night of the Hunter and forms about a quarter of the score of the 2010 film True Grit.[3]

Showalter authored several rudimentary books on music theory and a book on harmony and song composition. These were widely used in singing schools across the South.

He died in Chattanooga, Tennessee in 1924 and is buried at West Hill Cemetery in Dalton.

rif: Leaning on the everlasting arms