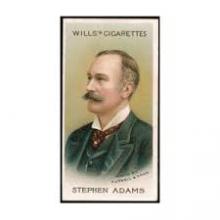 Born at 8 Church Alley, Liverpool, the fourth of the eight children of William Maybrick (1815–1853?), an engraver[2] and his wife, Susannah (1815?–1883?), both his grandfather and father served as parish clerk at St Peter's, Liverpool, and were minor composers. His uncle Michael Maybrick (1799–1846) was organist at St Peter's, wrote sacred music, and conducted the Liverpool Choral Society. Having become proficient on the piano by the age of eight, the young Maybrick studied the organ with W. T. Best and at the age of fifteen became organist of St Peter's; he also wrote anthems and had a work performed in London.